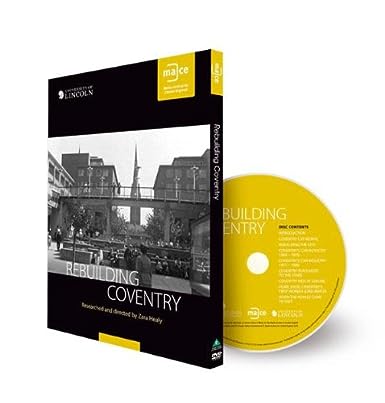 Rebuilding Coventry tells the story of how the city rose phoenix-like from the ashes. Using both amateur and professional footage spanning from 1948 to 1980, these short films have been researched, narrated and produced by Zara Healy from the University of Lincoln's School of Media.

Coventry, known as the birthplace of the British motor industry and one of the major manufacturing centres of the industrial Midlands, suffered terrible German bombing during the Second  World War. This culminated in a devastating raid in November 1940. Hundreds of people died and thousands of homes and buildings were completely destroyed.

Look back at memorable milestones in the city’s history, including a visit from the Queen as a young Princess to the War Memorial Park. The development of Coventry's new Cathedral, the Broadgate development and the Precinct  are all documented. The building of local landmarks like the Coventry  Baths, the Ring Road and Walsgrave Hospital can also be seen. The story of Coventry's flourishing car industry, once the envy of the world, is highlighted, featuring the production lines at Jaguar, Standard Triumph and Chrysler.

You can relive memories of when celebrities like Douglas Bader, Bill Haley and Morecambe and Wise visited Coventry and, for the first time ever, the story of Coventry's first Woman Lord Mayor, Pearl Hyde, is told using archive film.

"Even for the seasoned Cov reader or resident, this DVD shows welcome images of the rebuilding of the city after WWII. Film of the newly opened baths, the Cathedral being built and the car workers all over the city were interesting and useful to see."