Footprints in the Sand: Holidays on the Lincolnshire Coast 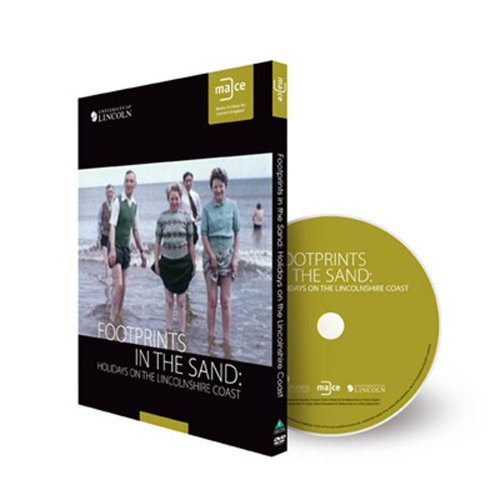 Footprints in the Sand, directed by Janice Kearns of the Lincoln School of Media, looks at traditional holidays to Skegness, Mablethorpe & Sutton on Sea through from the 1920s to the 1980s through a series of rarely seen and newly restored films that are preserved at the Media Archive for Central England (MACE).

Among the films are a series of home movies dating from the 1930s to 1960s showing scenes that will be familiar to many, including families paddling in the sea, walking along the promenade and playing cricket on the beach.

The DVD also includes extracts of We Chose Skegness, a promotional film made in 1961 and narrated by Richard Baker, which depicts a family who plan to go on holiday to their usual resort of Skegness but this time are able to 'do it in style' after winning the Littlewoods Pools. You will also see a series of news reports and home movies chronicaling the development of Britain’s first holiday camp, Butlins in Skegness, from the 1950s to 1980s.

There are also extracts for the 1920s film Leicester Poor Boys’ and Girls’ Summer Camp at Mablethorpe, including a wonderful scene of the children excitedly running onto the beach from the sand dunes above.

The DVD includes a short film, ‘About MACE’, a behind the scenes look at the work of the MACE team and the services they provide.

"A nice trip through time on mabo! And skeggie".