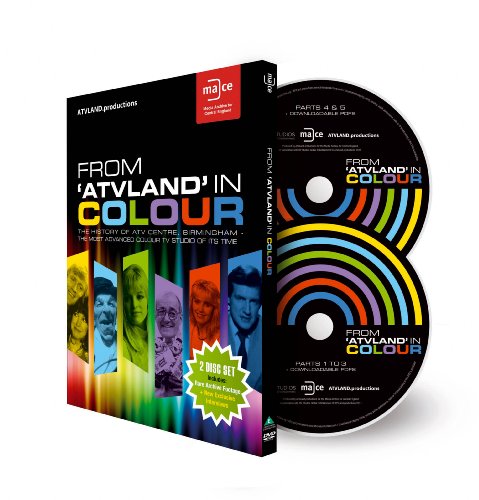 The DVD includes a mix of rare archive footage of regional news and programming preserved at the Media Archive for Central England, much of which has not been seen since broadcast, as well as interviews exclusive to this DVD with those who worked at the centre, including Jim Bowen, Barbara Bradbury, Reg Harcourt, Peter Harris, Diana Mather, Wendy Nelson, Jane Rossington, Debbie Shore, Chris Tarrant, Shaw Taylor, Gary Terzza, Bob Warman and Jo Wheeler.

Part one begins with a brief history of midlands broadcaster Associated Television (ATV) and its studio base in Aston, with anecdotes on some of the programmes produced there from those who were involved. The story then follows changes in the ITV system, leaving ATV in need of new premises for the age of colour broadcasting leading to the eventual opening of ATV Centre in 1970.

Parts two and three tell the story of the ATV Centre in operation throughout the 1970s, remembered by those who were involved and concentrating on the types of programmes made at the studios, including the regional output and various iconic shows, such as Crossroads, ATV Today, Tiswas and Miss ATV, with anecdotes from the interviewees.

Parts four and five continues through the 1980s with a change in ownership and the dawn of Central Television, bringing various changes in layout to the studios and a wealth of great programmes which were made throughout the decade. The documentary ends with ATV Centre’s eventual closure towards the 1990s due to changes in production methods and a look at how the studio site looks today.

"It's packed full of rare clips from the 60s through to the 80s. If you're a fan of television presentation, you'll love the interviews with many of the Continuity Announcers, and there's even a short section devoted just to the Central logo. Anyone with even the slightest interest in TV nostalgia will enjoy it. It's never dry, always engaging, and an absolute pleasure to watch."

"For anybody interested in the history of ITV in the Midlands, I would recommend this DVD. It is filled with interviews from many recognisable faces, and has a very interesting commentary. This is a great DVD for those interested in local media, or who just want to wallow in nostalgia from a time when ATV/Central was making great TV."